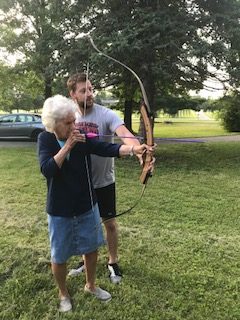 The last time Mama was at my house, I got out my bow, which was a Christmas gift from my husband. I shot it a few times right after Christmas, but it was a cold and snowy winter so I didn’t get a lot of opportunity to utilize it.

A June evening seemed like a fitting time for all of us have a little archery practice. I purchased a large target at Cabela’s a few weeks ago, knowing it soon would be perfect weather to shoot. And it was.

Mama has always been somewhat competitive so when I asked her if she would like to shoot the bow, she got a bit of a sheepish grin and said “Oh, I probably can’t do it.” Right. She was simply waiting for me to ask a second time and encourage her to try. Which I did and she did.

Mama is, in many ways, not unlike a three year-old. She occasionally pouts. She can be a bit manipulative. She often asks for several drinks of water before bed, a typical toddler move to avoid going to sleep. She also has a tendency to, in her words and actions, state “I can do it myself!”

Such was the case with the shooting of the bow and arrow, until one of her grandsons offered to help. She was more open to his assistance than mine. I snapped this photo which captures Mama to a tee, or to an arrow, I should say. She has the stance. She is eyeing the target and she is full on ready to shoot.

Days like these with Mama are good. She is distracted. There are others around. And she is ready to prove her worth. These days are not necessarily easier, just different. During this season of life with her, changing it up is entirely welcomed by both of us.

We kind of roll with it. We occasionally fly by the seat of our pants. It is new territory almost every day. I am considering taking her fishing. This could work out well because her truculence could come in handy when I do not want to put the slimy worm on the hook. Sometimes her feisty spirit comes in handy.

I also got her into the go-cart but that is a story for another day.