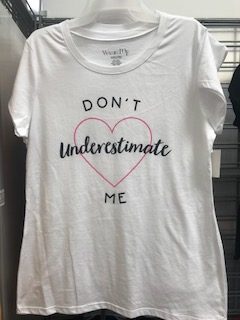 Margaret Thatcher was a British stateswoman who served as Prime Minister of the United Kingdom from 1979 to 1990. The Falklands War highlighted her most significant international relationship, which was with Ronald Reagan. Thatcher and Reagan, who together made the 1980s the decade of conservatism, shared a vision that the Soviet Union was an evil enemy who deserved no compromise. Their partnership ensured that the Cold War continued until the rise to power of the reform-minded Soviet leader Mikhail Gorbachev in 1985.

In 1976, Margaret Thatcher, in keeping with her strong anticommunism stance, gave a speech which earned her the nickname “Iron Lady” in the soviet press.

She was quite an impressive woman.

One of Thatcher’s famous quotes is this “Being powerful is like being a lady. If you have to tell people you are, you aren’t.” I love that so much.

Today when I was shopping for mousetraps and toothpaste and vitamins, I walked through the clothing section and ran smack dab into this T-shirt. It brought to mind Margaret Thatcher’s famous quote.

Though I appreciate the ideology of the message and that “woman power”, “don’t think you can push me around” mentality, I’m still not a fan.

If you have to wear a T-shirt that announces the message to not underestimate you, your value and admiration may already be in question.