Author Rebecca HendrixsonPosted on July 31, 2018August 1, 2018Leave a comment on The Last Night in July 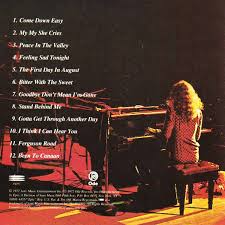 Every time July 31 rolls around I think of a song by Carole King. It was released on the album called Rhymes and Reasons in 1972. My older brothers had albums that I used to sneak and borrow so I could listen to them in my room on a small little thrift store turntable. I loved the James Taylor album Sweet Baby James, Jackson Browne’s For Every Man, and anything Carole King.

On King’s Rhymes and Reasons album, there were so many great songs; Feeling Sad Tonight, Goodbye Don’t Mean I’m Gone, the hugely popular Been to Canaan, and the one to which I am referring in this blog post, The First Day in August.

There is something about the last day of July that brings a touch of sadness. I think, in part, it is because it marks the last full month of pure summer. Technically, we still have summer until the first day of fall, which is September 22. But we all know that by August, the back-to-school blues are beginning and things begin to feel different. All summer clothes go on sale. The days begin to darken noticeably sooner.  We start to hear about dates set for fall festivals and pumpkin runs.

So this song. I do not 100% love all of the words, but there is something sweet and sad about the song that draws me in. I am going to share it so you can join me in the end of July blues. James Taylor crooned about calling on friends in winter, spring, summer, or fall.

Isn’t that what friends are for?

On the first day in August

I want to wake up at your side

After sleeping by you on the last night in July

And we’ll chase it from the mountains

To the bottom of the sea

When the day is over

And the night air comes to chill us

And we’ll watch the flames dancing

With your arm around my shoulder

And nothing will comes between us

On the first night in August

The first day in August